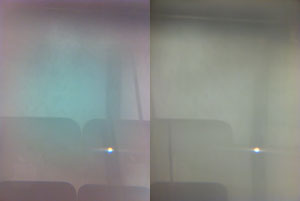 The other day I had a little time to kill so I wandered into an Apple store to just wander around. Whilst said wandering was occurring, I wondered if Apple had gotten around to fixing the awful camera discoloration that the iPhone has, which very apparent under indoor lighting.

Imagine my surprise when I fired up the demo iphone’s camera app, pointed it at a plain white spot on a sign and found an almost entirely neutral image! Fuck yeah I thought to myself, it might be time for a warranty swap!

Then I noticed this was a Verizon iPhone. Hrrm. I looked around for an ATT version, and sure enough, it was still discolored. So I proceeded to check every camera in the store. Every Verizon phone was fine, every ATT phone was discolored. Ugh.

I took the above picture with my iPhone and a Verizon iPhone pointed at the same source at the same time. As you can see, my phone has a pretty bad discoloration.

There’s still no consensus about what causes the issue, hardware or software. And until iOS 4.3 is released, we won’t know for sure. It may be that ATT iphones shipping today have a hardware fixed camera, and none of the display units at the store were new enough to have it. It may be that the 4.2.6 iOS that’s running on the Verizon phone has a software fix. But I’ve heard that some folks running the 4.3 beta on their ATT phones still have the discoloration.

There’s a very real possibility that the problem is indeed a hardware problem, and Apple never intends to fix it on the the ATT iphone 4. I’m sure almost all their engineering efforts are now aimed squarely at the iPhone 5. But I really hope this isn’t the case. I’m hoping that if it is a hardware issue, the newer ATT iphones will have the revised camera of the Verizon version and I’ll be able to do a swap.

But if nothing else, if 4.3 doesn’t fix it, I can try swapping the camera 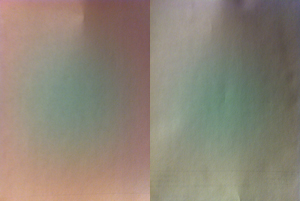 While the Verizon camera doesn’t completely fix the problem it’s a major step forward. My living room lights are like torture for the iPhone camera, and as you can see, a white piece of paper under my lights looks worse than the white signage at the apple store. The Verizon camera clearly still has a blue spot in the middle, but it’s much much better than the ATT camera in the rest of the frame.

I will say, with this camera, images that aren’t entirely filled with white look normal under any light. I could not say the same with the ATT camera. In fact, even on mainly white frames, if you pull back and let the edges have some other color reference, the discoloration becomes much much less. That was not true of the ATT camera.

I now believe that the problem is a combination of hardware and software. Whatever fix they’re using to take out the remaining blue discoloration on the Verizon iphone is not present in iOS 4.3 and we’ll probably have to wait until Apple unifies the iOS releases between ATT and Verizon.