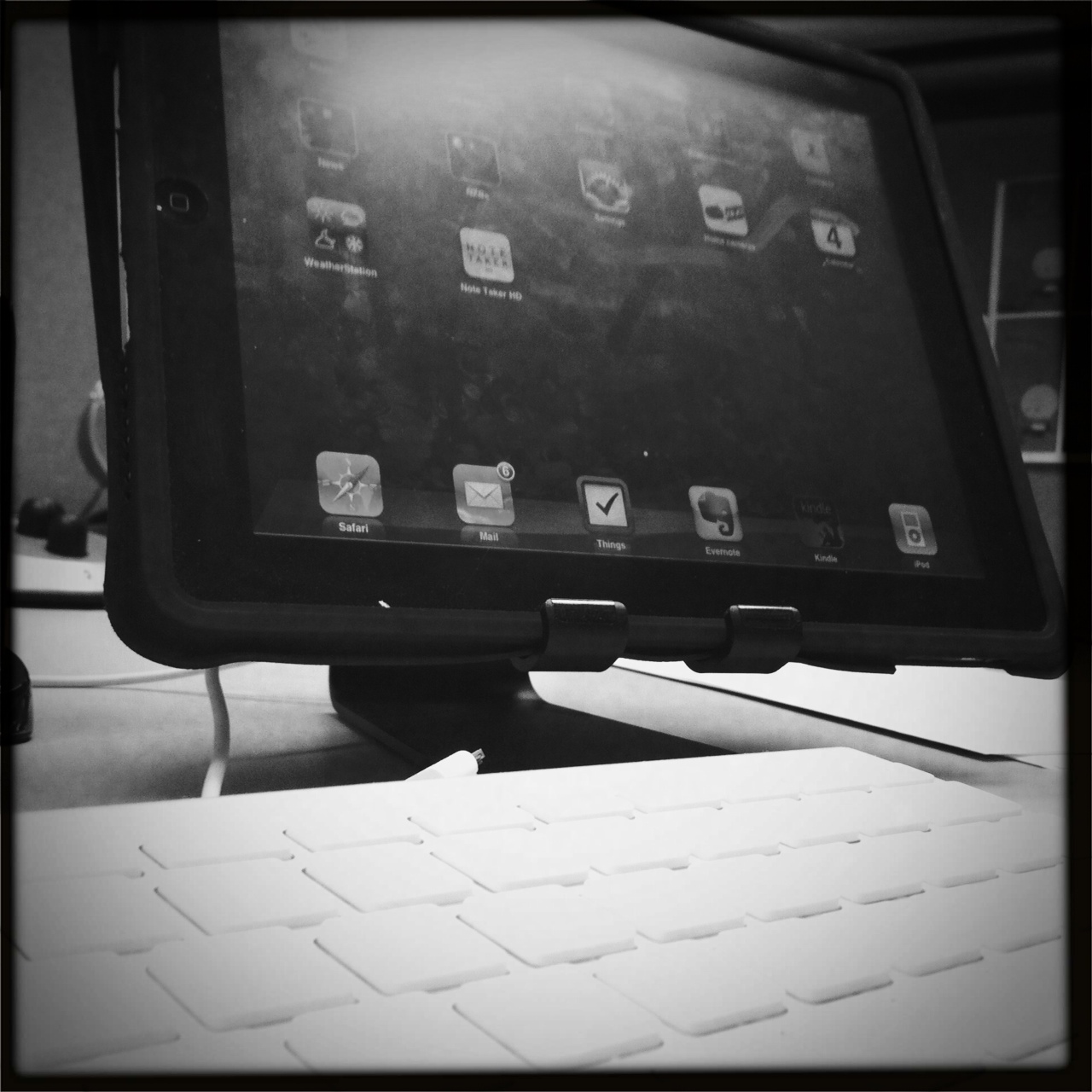 It’s hard to believe that the iPad has been out for a full year already. But here we are, with a shiny new tablet, and its time to justify my inevitable wallet cratering that will take place next friday.

I was a first day purchaser, convinced that the iPad would be a “really big deal” both in the market and in my everyday life. I imagined all sorts of cool things that I would do with it, freed from the cumbersome form factor of the laptop.

The first few months were definitely rough. There were few true iPad capable apps, and in some regards, there are still few (outside of games) that really intelligently take advantage of the screen space and touch paradigm of computing. Even some of my favorite apps still needlessly leave out features because they’re stuck in iPhone land cough -multiple tag filtering in Things- cough.

Google had a rocking gmail client out of the door very quickly but continues to let google docs flounder.

I was convinced I’d be able to do all my web browsing from the iPad, but anyone used to tabbed browsers will weary of the iOS safari experience very very quickly. That combined with a lack of plugins to manage the cesspit that the internet has become, makes for a clunky and awkward browsing experience. Adblock is the major standout here, but there is want for a variety of other plugins as well. You can get around some of the shortcomings by using bookmarklets, but the only way to get them on your machine is to manually sync them over from the desktop. Le lame. Unfortunately the iPad was given a mere 256MB of ram, meaning safari constantly has to reload tabs. Also lame. Only recently has Apple allowed for other browsers in the app store to fix some of these shortcomings. Atomic Web is now my go to browser on the iPad.

Kindle was a killer app on the day the iPad launched, and it continues to be a bedrock app on my iPad. Amazon has terrible quality controls on the books that get pushed out by the publishers, and many are just unreadable on the iPhone or a 6in Kindle reader. The iPad can accommodate the lazy bastard publishers who insist on charging paperback prices for unedited e-books.

The Netflix app was very rough at launch and a complete crashfactory. It’s much better now.

But a few months in, I was pretty close to just using the iPad as my Kindle device and a media player for my workouts. It took probably 6 months for the iPad to really hit its stride with developers and apps before I really found it useful.

What makes it work for me

And there are a couple that I’m just trying out that are looking very good:

In the last 3 months or so, I’ve really been focusing on making my iPad my paperless office. So Evernote and Things have been front and center. I work on a lot of projects which produce a lot of documents, and not having to carry around a stack of papers is pretty awesome. Make a PDF, dump it into evernote, and you’ve got a fully text searchable archive at your fingertips whenever you want it. And the iPad doesn’t get the dirty looks that laptops bring in meetings. I have a lot of good things to say about evernote, but they belong in a separate post. One of my complaints however has been its speed in rendering longer PDF documents. I’m not sure if it’s a processor issue, or a RAM issue, but the new iPad is almost certainly going to make it faster. Add in the fact that the iPad will have cameras for capturing whiteboards, and honestly this is enough for me to do the upgrade.

I love Things, but I really really hate its developers. They’ve taken two years to implement the creation of repeating tasks on iOS. Really. Apparently because they are ridiculously obsessive over-designing freaks. Over the air sync is still being worked on, because it has to be absolutely perfect on the day it ships. As of now, Things only exists on my iPad even though I have licenses for iPhone and Mac because the syncing situation is just ridiculous. Things in every iteration is an amazing app, but it sure seems like cultured code has lost the message when it comes to shipping the product. The new iPad will get me nothing here, but I just wanted to take the opportunity to get a dig in at cultured code.

A recent addition has been Note Taker HD. No matter what you’re typing on, in a meeting, you’re still typing, and for some reason people hate it. So if you’re like me and you need to take a lot of notes, you’re still rocking a note pad. I could scan in my notes each day and send them over to evernote, which is a lot easier with something like the Scansnap, but that is a huge pain in the ass, and it’s really easy to get behind on your scanning. I want to write my notes directly into the ipad.

Evernote doesn’t have this functionality at the moment and I doubt it ever will. But Note Taker HD does. There are a couple of options for handwritten notes on the iPad, but Note Taker HD is the only one that deals with the low resolution of the iPad digitizer efficiently. It has an entry area not unlike the old Palm Pilot devices where you can write 4-5 words and then it will seamlessly move the writing area over for you to create a normal line of text. Without something like this, you end up with maybe 10-15 lines of text with maybe 7 words each given how imprecise the ipad is to touch input. Having a stylus makes a big difference as well. Once the note is done it’s e-mailed to my evernote address and I’m good. Right now, the digitized text lags the stylus by a noticeable and I’m hoping that the new iPad will offer enough of a horsepower upgrade to make it real-time.

But even if that doesn’t work out as planned, the iPad along with evernote is an invaluable reference resource for anyone who deals with a lot of documents when need to be referenced with some level of regularity.

I’ve written somewhat extensively about the Kindle and the Kindle app ecosystem. I’m a really big fan despite the lack of quality control. Most big companies I’ve seen have a sort of culture around which business books resonate with or drive their strategy. My company is heavy on Good to Great, and The Discipline of Market leaders. As is also often the case, most people haven’t actually read the books, but key phrases or core concepts become part of the company vernacular. It’s extremely helpful to have those books at your beck and call at any time, especially when someone is making some argument from the book which is the opposite of what the book actually says. Yes I’ve done this, and yes I’m a jerk.

By and large the ipad has become a business device for me. Which I’m completely fine with. For its price, it’s worth it just to have filing cabinets worth of information available to me at all times. In fact, I’ve already convinced 2 other folks at work to buy and use the ipad in the same way I am. When it comes right down to it, the iPad fits into work in a way that neither my iPhone or a laptop can.