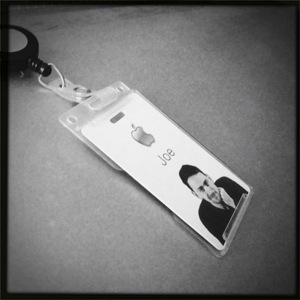 The recent retirement of Steve Jobs was as emotional for me as I think it was for a lot of Apple fans. Steve wasn’t just the CEO of Apple. He was the figurehead for not just Apple, but for a sensibility about what role computers should play in our lives.

My early childhood was in many ways defined by computers, mostly Apple computers. For as long as I can remember, I wanted to work for Apple when I grew up.

By the time the Apple retail stores opened, I had been fixing Macs professionally for 3 years, and informally for many years before that. I was really good at fixing macs. I knew OS 9 inside and out, and I had worked on every Mac that had been made. I could fix most modern Macs of the time without manuals, and could in many cases could be handed a pile of different screws and tell you exactly were they went in a machine.

By the time Apple hired me as a Mac Genius, I had put in much more than Malcolm Gladwell’s 10,000 hours.

By that time I had already seen a lot of Apple’s uglier side. Apple had started beating up on Apple Authorized Resellers, and their service organizations well before the opening of the stores. Apple service became much more like a supply chain management operation than a customer service operation.

So when I took the dive into the Apple stores, I thought “this is going to be different. This is going to be Apple’s chance to do it right”. I already had friends working in the stores, and the reports I heard back were good. So I took the leap, and I was finally working for Apple Computer.

The first year or had its ups and downs, but by and large, it was really great. But it rapidly went downhill. I eventually came to the conclusion that Apple didn’t really care about repairing people’s computers. By the time I quit, I was extremely burned out, and angry at Apple.

Since then, I’ve always wondered by Apple cared so much about developing new products, but seemed to hate fixing them when they broke.

It wasn’t until Steve’s retirement that a lot of things clicked for me. Apple has always wanted to make things simpler, reduce complexity, and get things right the first time.

When you have to fix a computer, that means you didn’t get it right. It went out the door with a flaw or a bug, and you’ve created a bad experience. Yes you can try and recover from that experience, but it’s not the same as never having had it happen.

What I ultimately realized is that Apple didn’t want people like me, people who had figured out all the flaws, and knew how to fix them or work around them once a product was already in a customer’s hands. Apple wanted people who would make sure those problems never happened in the first place. Steve didn’t want people who could fix broken products, he wanted products that didn’t break.

Why doesn’t apple publish details on RAM amounts or processor specs on iPhones? Because it should never matter. The phone should be able to do the things you want to do flawlessly regardless of its hardware specs. Witness the HP touchpad, better specs than an iPad, but can’t scroll a webpage smoothly. The experience matters.

I was a genius of the old school. I exposed customers to how computers worked. What I didn’t figure out until much later was that nobody gives a shit about how computers work except for computer geeks. A service person who knows a lot about computers reminds people how much they don’t know. And they really shouldn’t have to know.

Steve’s vision far preceded Apple’s ability to deliver a computer that “just worked”. It needed people like me, but it didn’t want them. So I eventually quit. But now I understand why I felt like I didn’t fit at Apple, or at least at Apple Retail.