So the ballot measure is done, and it passed by a huge margin.

I was really conflicted on this. There are a lot of factors that go into making a decision about a tax that will take a billion dollars a year out of our state economy. Especially in a time that our economy is in a shambles, and we’ve dealt our tourism sector a crippling blow with the passage of SB1070.

Arizona has wide spread, deeply rooted, systemic issues that this tax does nothing to fix. And it some ways it serves as a relief valve for politicians to continue to do nothing. They have another 3 years to ride out the bad economy in hopes that they won’t have to make the truly awful choices that face them.

In fact, until recently, the state legislature was working on tax cuts in the form of H2250 that would reduce corporate taxes, repeal the property tax, and lower income taxes. Seriously. In the face of a 3 billion dollar budget shortfall, our legislature wanted to cut taxes, and Jan Brewer was the only voice of sanity, promising to veto it, leading to its death in the senate. She thought it would look bad to cut corporate taxes while at the same time raising sales taxes.

Our legislature continues to labor under the republican fantasy that lower taxes lead to more tax revenue in the long run even though they’ve been shown not to over and over again. Tax cuts lead to greater deficits.

So there’s a very real concern that taking pressure off the state budget will encourage our republican legislature to reduce taxes for corporations and the wealthy and land us right back where we were before the sales tax increase.

Arizona aggressively pushes its taxes onto the poor and has the 4th most regressive tax policy in the US. Unfortunately prop 100 is an extension of this tax policy. 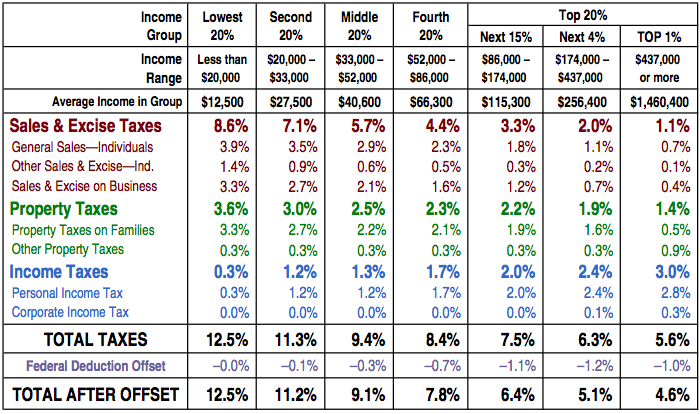 As you can see in the image above, sales and property taxes hit the poor much harder than the wealthy, and prop 100 is only going to push up the burden on the poor, while having little if any impact on the rich.

You’ll notice in light blue the percentage of corporate income tax paid across the board is almost nothing. In 2009 Arizona collected $7.3 Billion in sales and use taxes, $1.9 billion in individual income taxes, $836 million in property taxes and just under $600 million in corporate income taxes. That corporate number should stand out, as H2250 would have reduced it by 1/3 or so, reducing an already very low corporate tax collection to almost nothing, despite the fact that it would provide little economic benefit. As a side note, the Arizona Department of Revenue’s year end reports are complete shit, and their numbers don’t match up with the Census Bureau’s (might be a FY thing, but they’re still shit). I trust the Census.

So Arizona really had 4 possible tax choices to pick from when trying to meet the deficit. Property, sales, income and corporate income.

Sales taxes already make up the majority of taxes collected by a wide margin, and they are highly regressive. But it’s much easier in this state to pass taxes that largely affect the poor. This is why Jan Brewer decided to take this route.

So you’re left with personal and corporate income taxes. Our state income tax is fairly progressive, so it would have made sense to increase personal income taxes instead of sales taxes if we were interested in providing an equal burden across classes. Of course, this would never fly because Prop 100 is largely about protecting k-12 schools, and it’s reasonably safe to say that a good chunk of the rich in AZ either don’t have kids in school, or their kids are in private school. Also, to reach a goal of providing $1b the state income tax would have to increase by 50%, which sounds a LOT worse than “a one penny tax”.

We could also have raised corporate tax rates, which would have had almost no impact on the poor at all (some from increased prices, but probably not as much as 1%, really depends on how much they sell in state). But our legislature is convinced that lower taxes means more jobs and the solution to our 9% unemployment is to cut taxes on corporations, not raise them.

So we can raise taxes, or we can cut services. Republicans in the state of course jump at the opportunity to carve more money out of the budget for education and refused to pass any legislation that raised taxes as they know it would be very unpopular. For some reason they believe that cutting school funding will less unpopular.

So Arizona voters were given a sort of lousy choice. Choose between levying a highly regressive 15% sales tax increase on Arizona’s citizens, or decimate our schools.

I personally would have taken an income tax increase to try and keep the collateral damage from hitting the poor too hard. But that’s unfortunately not a political reality. And our state lawmakers are simply too lazy or too dumb to come up with other solutions.

So I voted yes under considerable protest. I believe there were other viable solutions to avoid cuts in education, but I knew our legislators wouldn’t pursue them. And I didn’t mind tax increases, but we ended up with the worst possible kind.

But I also think we’ve bought our lousy legislature a lot of time to avoid making larger, structural changes to the state budget that it badly needs. Either government has to get smaller, or taxes have to increase. The good old days aren’t coming back any time soon, and we’re going to have live with the reality of that.