Recently I’ve had more free time than is reasonably good for me, and decided to look into the current state of “canal phones”. For the past 5 years or so, I’ve used the Sony MDR-EX71s both at work and at home and I’ve never really had any issue with them. I got them as a replacement to the terrible ipod headphones and bought them from the Apple store where I worked.

Much has happened in the world of canal phones and some really serious headphones have emerged. You can get some really decent headphones that have good noise isolation for around $50. Then step ups in quality tend to happen at the $100, $150, $200, $300 and $400 increments.

For my own listening and pocket book, I could never justify going over $150, and any set at that price would have to be amazing.

I’m a cheap-ass when it comes to this kind of thing. Considering that you can buy really respectable computers these days for $300, I’m not just willing to drop major coin on a set of earphones. If I was still an emo teenager who spent many many hours listening to Nine Inch Nails and wondering why no one understood me, I might care more. But I was willing to drop $50 on the new state of the art. (which BTW at this moment seems to be the Ultimate Ears Metro.fi 200s which can be had with a little shopping for just over the $55 mark)

So I started scouring the interwebs for “best cheap headphones”. I would implore you not to try and duplicate this course of action for this way lies madness. You’ll quickly fall into the sludgepit of “Audiophile” message boards and go insane trying to sort the signal from the noise. There’s lots of brand favoritism, and lots of “golden ear” experts criticizing one another’s choices in phones.

But, within this dreck can be found diamonds.

My beloved EX71s take a hell of a beating on these forums and they are widely panned for their overbearing and muddy bass which overpowers the mids and highs. “Funny” I thought, I never really minded the bass. Many advocated the Sennheiser CX300s as a possible alternative, while others simply said stop cheaping out and just get some Shures. But some were talking about modding the EX71s and getting great sound. I was intrigued.

Since I was already thinking about some replacements, I had nothing to loose, why not give it a shot.

There are 2 particular mods that are recommended:

I personally didn’t notice any difference from number 1. Didn’t seem to help or hurt the sound. 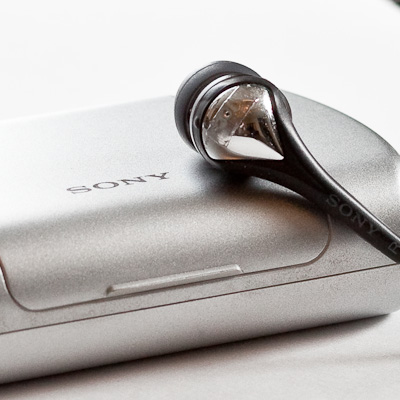 Number 2 was a completely different story. Just removing the paper filters made a tremendous difference. Overpowering bass was now sharp, but controlled, and in good proportion to mids and highs. But the highs were actually probably a bit too sharp. Following the advice on another thread, I took some metal tape, covered the canal tube, popped a small hole in it, and the highs are now reigned in. 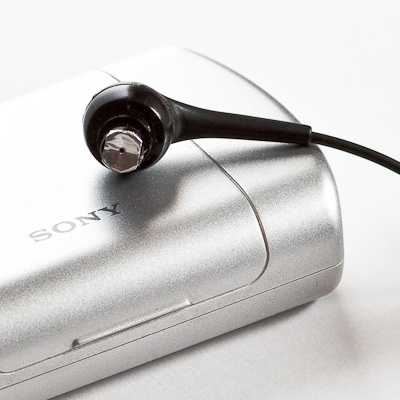 I compared my modified set to my stock set on my powerbook, with a couple of different songs, but I sort of settled on “Today” by Smashing Pumpkins. It’s got some nice mellow plucky guitars that push quickly into crunchy distorted land along with heavy bass.

With the stock set, the best way I can think of to describe it is to say it sounded like listening to the song underwater. I had never really found the bass sound objectionable, but after listening to the modded set, it was a world of difference. The stock set sounded cheap and thick. The modded set sounded extremely clear and sharp. It’s really hard to describe the difference without sounding hyperbolic and silly, but it’s genuinely startling. I had taken to using a “california smile” EQ setting in itunes to clear things up, and with this mod I’m now running without the EQ.

If you have a set of EX70s or EX71s around (apparently same goes for the EX51s as well), I’d really recommend trying out these mods.

There are also similar mods that can be done to the Sony MDR-EX85s which by some reports will make them sound close to the $300 Westone UM2. I’m not sure if that’s actually true, but I’m willing to give it a shot. The EX85s are around $44 on amazon, and I picked up a set for $35 from another amazon marketplace seller. When I get them, I’ll do the mods and let you know if it’s worth it.

While on this whole kick, I read up a bit about replacement ear thingies for the EX71s and a variety of other canal phones. Again, opinions vary, but some people really dig the Comply Foam Tips. Basically these replace the silicon “olives” on your canal phones with an equivalently shaped chunk of memory foam that act roughly like an ear plug. The goal being a better more comfortable fit that also does a better job of excluding environmental noise. Not much gets through my silicon jobbies, but some still does, especially on planes or other loud areas. We’ll see if these do a better job.

EDIT: Comply’s came in the mail today. I don’t notice much of a change in my quiet apartment, but I’ll give them a shot at work next week. They are definitely longer than the stock olives but seem to fit okay. The seal is good in the ear, and I don’t notice the seal dropping when I move my jaw, but the stock olives weren’t too bad there either. 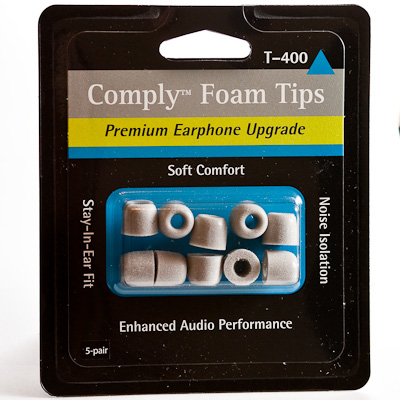